Dumb and Dumber To is a fun, nostalgic road trip with your best dim-witted friends by your side They said it would never happen – 20 years in the making – but finally the fans were given a ‘Dumb and Dumber To’ with a reunited Jim Carrey and Jeff Daniels reprising their roles as the lovable but dim-witted best buds duo Lloyd Christmas and Harry Dunne. How does the long-awaited sequel measure up?

Music is such a powerful entity. There are songs you associate with certain people, places and moments in your life that stick with you as long as you live. Sometimes those songs are associated with a film because it’s so ingrained in its soundtrack that you can’t help but make the mental association between the two whenever you hear it. For what is Pretty in Pink without Orchestral Manoeuvres in the Dark’s “If You Leave” or Wayne’s World without Queen’s “Bohemian Rhapsody?” As soon as I heard the hauntingly familiar strains of Apache Indian’s “Boom Shack-A-Lack” at the beginning of Universal Pictures/New Line Cinema’s Dumb and Dumber To, I knew this was going to be a fun, nostalgic ride for me with my favorite feebleminded pals, Lloyd Christmas (Jim Carrey) and Harry Dunne (Jeff Daniels), once more behind the wheel.

Jim Carrey was a tour de force that was present – and seemingly relevant – everywhere in my world in 1994-95.

With that song playing over the credits, I was immediately transported back to 1994-95 and the first time I glimpsed Lloyd behind the wheel of the limo and Harry behind the wheel of the Mutt Cutts van as that same song played over the credits, and all these powerful feelings washed over me. I know what you’re probably thinking – fond feelings for a film with the words Dumb and Dumber in the title? When the first film came out, I was 12 and an impressionable youth in middle school. Jim Carrey was suddenly a comedic tour de force that was present – and seemingly relevant – everywhere in my world. He made his ass talk as Ace Ventura: Pet Detective. He was ssssmokin’ in The Mask. And he was the endearingly dim-witted, chip-toothed Lloyd Christmas in Dumb and Dumber. All of my friends – and even a few of my crushes – were discussing him and his zany antics both inside and outside of the classroom. And my 12-year-old heart was smitten with a fervent adoration that has never quite left me no matter how much older I get or what real boyfriends have miraculously come – and regrettably gone – in my life since.

My love for Jim Carrey has certainly had its peaks and valleys within the past 20 years, but that’s to be expected with any relationship, whether real or imagined. When I heard they were making a second Dumb and Dumber film, I knew two things. First, it was good to see Jim Carrey not taking himself too seriously and returning to a role that made him a bona fide star. He’s already proven how versatile he can be by taking on various roles that required more emotional depth of him throughout the past two decades, including Andy Kaufman in Man on the Moon, Eternal Sunshine of the Spotless Mind, The Truman Show and The Majestic. But there is something irresistible about Lloyd Christmas that makes him one of Carrey’s best beloved characters and a fan favorite among many. Secondly, it was good to see Carrey appearing in a film, period. It feels like he’s been taking longer breaks in-between films since he became a grandfather and a published children’s book author.

And the fact that he was reuniting for a sequel just because he enjoyed making the first one so much and because he knew it would mean a lot to the fans? Well, that just makes me love him all the more. I enjoyed following the social media and seeing behind-the-scenes photos from the set during the production phase. It allowed me to have a more personal relationship with Lloyd and Harry – a fan could not ask for more. And I recently read that the Farrelly Brothers couldn’t get in touch with Brady Bluhm to reprise his role as Billy, the blind kid with the pretty bird, for the sequel until they found him through Facebook and asked him to come back that way. A lot has certainly changed in 20 years!

Dumb and Dumber was a film that spoke to my generation. That “dumb” little movie had a lot of heart.

While it was panned by many film critics as being too sophomoric in its content, Dumb and Dumber was a film that spoke to my generation. While the humor is decidedly crude at times, it made no pretenses to be anything else. After all, the word dumb is right there in the title for the naysayers. But that “dumb” little movie had a lot of heart. There was a strong bond of friendship between Harry and Lloyd that you just don’t see every day. And the laughs kept coming! Jim Carrey’s unique physicality and brilliant improvisational abilities paired with his natural chemistry with Jeff Daniels allowed the film to reach a different stratosphere than it would have with anybody else in the lead roles. With so many memorable one-liners, many of us in our 30-somethings still find ourselves quoting it to this day.

I think it’s a gross understatement for me to say it was good to see Harry and Lloyd reunited on the big screen for Dumb and Dumber To. I know 20 years have passed and we’ve all gotten older, but they really don’t look it. Harry and Lloyd look almost identical to how they looked when we last saw them. The laughs may still be crude, but they’re definitely still there in spades. For example, there’s a scene in which they are driving down the highway in a hearse and they pass a bus full of children and Lloyd smears a jelly donut’s powder and red jelly all over his face and he peeks out at the kids from the back of the hearse like he’s a zombie. I also couldn’t stop chuckling when they addressed Katherine Turner as a “sir.” You will find yourself laughing at the dumbest and most unexpected things in the sequel, just like you probably did when you saw the original film, and I think that’s a beautiful thing.

The plot is not very far-removed from the first one, and overall, it’s an enjoyable romp through familiar territory with some new friends along for the ride, including bad guys Laurie Holden and Rob Riggle, and Rachel Melvin as the adorable but dumb Penny, who’s supposed to be Harry’s daughter after a one-night stand with Fraida Felcher (Kathleen Turner). There are also some unexpected fun cameos along the way (Mama June from Here Comes Honey Boo Boo and Bill Murray as Ice Pick … who knew? But that’s what IMDb reports, although they still have Jennifer Lawrence listed too, so I take that with a grain of salt until I can watch it again.) A word to the wise: Be sure to stay past the credits for a special bonus scene: “Kick his ass, Sea Bass!”

Thanks for making this, Farrelly Brothers, and for indulging the inner kid in me.

While I wouldn’t go out on a limb and say the sequel is better or funnier than the original, it was better than I honestly expected it to be. It’s obvious Jim Carrey and Jeff Daniels had a blast filming it, for they both radiate a pure, unadulterated joy from the beginning to the end, which is not only necessary for their characterizations but is also definitely not something you observe every day. I read somewhere that the word nostalgia is made up of two Greek words meaning “return” and “suffering,” so it really means a suffering caused by an unappeased yearning to return to something. In the case of Dumb and Dumber To, I believe my yearning to return to the Golden Age of Jim Carrey has been appeased. I don’t really care what the other critics have to say. It’s like a childhood dream just came true for me being able to see Carrey’s Lloyd Christmas up on the big screen and being able to write about him now that I’m an adult with a more compelling voice. Thanks for making this, Farrelly Brothers (and for making it better than the excruciatingly painful film that was Dumb and Dumberer: When Harry Met Lloyd), and thanks for indulging the inner kid in me. “I like it a laaht!” 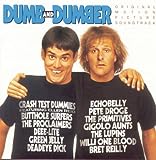 Category: Features, Movies · Tags: dumb and dumber to, Dumb and Dumber To review