Clacked by Kim Tibbs on Saturday, October 4, 2014 · Leave a Comment Did easy-on-the-eyes Ben Affleck really kill his on-screen wife in ‘Gone Girl’? Find out how the newest thriller from David Fincher stacks up to all the buzz surrounding it.

I have a semi-disturbing question for those of you who are married or in serious relationships – how well do you really know that person sleeping beside you? Their deepest desires, darkest secrets and inner workings and capabilities of their mind may surprise and/or scare you, if Twentieth Century Fox’s chilling thriller Gone Girl is any indication.

Starring Ben Affleck as Nick Dunne, the husband who finds himself thrust in the spotlight of suspicion when his wife Amy (Rosamund Pike) turns up missing on their anniversary, Gone Girl is based on a novel written by Gillian Flynn. Flynn also penned the screenplay, so I presume it must follow the plot of the book fairly closely, although I haven’t read it.

Gone Girl is like a beautiful but bizarre jigsaw puzzle that takes its time getting put together.

Similar to his other films Zodiac, Fight Club, Se7en and The Girl with the Dragon Tattoo, director David Fincher keeps the audience engaged and guessing about the many plot twists and turns as Gone Girl unfolds. The dark, almost melancholy backgrounds, Affleck’s haunting opening monologue about wanting to crack open his wife’s skull to spill forth her secrets, the stark-looking film credits and the eerie musical score by Trent Reznor and Atticus Ross wonderfully set the tone for the next two and a half hours. Gone Girl is like a beautiful but bizarre jigsaw puzzle that takes its time getting put together. It can be at times frustrating, at times predictable, at times outrageously absurd and at times so enlightening and/or frightening to ponder in its rich layers of complexity that probably no two people will share the same exact theater experience.

What I appreciated most about this film was being able to see the investigation from all sides. Society seems to have a macabre fascination with cases involving missing persons, especially when it’s a husband under suspicion for the disappearance and/or murder of his wife. Anybody else remember the media circus that was the Scott and Laci Peterson case? Gone Girl is a very similar story but you get to see it develop as a behind-the-scenes spectator beginning on the day of the disappearance and working forwards and backwards from there.

July 5, 2012, begins normally enough – Ben Affleck’s character goes for a drink at the bar he co-owns with his hilariously sarcastic twin sister Margot (Carrie Coon) and then he returns home to find his wife missing. He promptly notifies the police when he suspects foul play. It’s interesting to watch Kim Dickens and Patrick Fugit dig around for clues – Kim’s police detective is very shrewd while Officer Patrick adds the necessary comedic elements to their yin-yang partnership. Each day presents new information about Amy’s disappearance and the case slowly but steadily building around Nick, as you also glean some of the more intimate details about the couple as seen through flashbacks about how Nick and Amy met, fell in love and got married as told through Amy’s diary entries. It’s hard to know which person is more at fault for the unravelling of their once-happy marriage.

Tyler Perry puts in a solid performance, while Neil Patrick Harris is also a stand-out.

The missing persons case quickly warrants national attention because it turns out that Amy is not your ordinary housewife. Amy is none other than the “Amazing Amy,” the daughter of two famous authors who penned an entire series of books revolving around her childhood and “amazing accomplishments.” Tyler Perry puts in a solid performance as Nick’s Johnnie Cochran-like defense lawyer, Tanner Bolt, who clearly specializes in cases of this celebrity and magnitude. There is a scene in which he coaches Nick on what to say for a national television appearance in order to make the public more sympathetic about the nature of his character after he’s made several incriminating faux pas. It was a fascinating study in human nature and how body language can convey so much about a person’s attitude. Also look for Neil Patrick Harris as Amy’s uptight ex-boyfriend Desi Collings and Casey Wilson as nosy neighbor Noelle Hawthorne – they’re both stand-outs in the film.

At about two and a half hours, Gone Girl felt a little long. While I thoroughly enjoyed the first three-fourths of it, it was the final fourth that left a bitter taste in my mouth. I won’t go into detail and reveal plot spoilers, but I will say I was not the only member of the audience left sitting there in an almost angry, bewildered cloud of confusion after it ended. It almost makes me want to read the book because I want to know more about what these characters were feeling and thinking inside their heads. Maybe then, and only then, will I find peace because the end felt so flawed and full of holes it didn’t make sense to the shrieking rational side of my brain.

Gone Girl felt like a marriage made in the darkest circles of hell, not purgatory.

I recommend Gone Girl if you’re looking for a film that makes you think about the ties that bind, how men and women relate to one another or if you’re looking for something a little out of the ordinary. There’s almost an artsy element to its cinematography. However, if you’re about to get married, it might make you think twice. Abraham Lincoln once said, “Marriage is neither heaven nor hell, it is simply purgatory.” Abraham Lincoln was a wise man but Gone Girl felt like a marriage made in the darkest circles of hell, not purgatory. Ben Affleck and Rosamund Pike are both excellent in their roles. 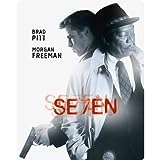