Checking Out the Green Lantern: The Animated Series Blu-ray

Clacked by Katie Schenkel on Monday, July 7, 2014 · Leave a Comment Fourth of July was this weekend and there didn’t seem to be a better way to celebrate it than watching a show about guys in green spandex and a rage bunny in love with a spaceship. So I broke out my ‘Green Lantern’ Blu-ray.

I’m a fan of Green Lantern: The Animated Series. I said as much when I wrote about the Cartoon Network series several times here on CliqueClack during it’s painfully short run (two big space epic storylines in just 26 episodes). And it took over a year since it was canceled, but the complete series Blu-ray finally came out this past spring. I had been slowly rewatching the series through the Blu-ray and with the Independence Day weekend, I sat down watched through to the end. Turns out that I’m still very much a fan of this show.

The main cast’s whole dynamic is great, but the shining stars of the story are the two new characters of Aya and Razer. Both have character growth that develops slowly; you really see it when you watch the episodes one after the other. While the Star Sapphires frustrate me to no end (mostly for the same reasons their whole origin frustrates me), Carol Ferris herself is very well-written. Also it’s so rare for Carol’s Star Sapphire costume to not look male-gazey and I appreciate that her costume in GL:TAS doesn’t make me cringe.

I enjoyed getting to see all the prettiness in HD.
As far as the Blu-ray itself, it unfortunately doesn’t come with any features outside of the subtitles. This is a disappointment for the fan in me who loves fun behind-the-scenes cast and crew goodies (although if you’re looking for that kind of thing, you should check out series creator Giancarlo Volpe’s YouTube account). With that in mind, there are only two reasons why you’d buy the Blu-ray. One, because of the high-definition. While the series’ animation started off a bit stiff in the pilot, GL:TAS has some gorgeous set designs, character designs and effects for the explosions/holes in the universe/lantern constructs — I enjoyed getting to see all the prettiness in HD. The other reason is that the alternative is the DVD set, which are actually two sets that actually split up the season. So if I had to choose, I’d definitely pick the HD complete set in with the pretty box that actually says “The Complete Series.”

Watching through it again reminded me of how much potential and set-up they had for another season, from Sinestro’s introduction to the mention of John Stewart to that very last heartbreaking shot of the finale. Green Lantern: The Animated Series is a prime example of a show that got some great storytelling done but had so much more to do. Even if you watched the series when it aired, I highly recommend giving the whole series a watch through — the Blu-ray is as good a way to do it as any. 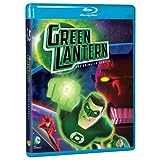