Be prepared for a morality check with Pain & Gain Mark Wahlberg and Dwayne “The Rock” Johnson team up in Michael Bay’s first post-‘Transformers’ directorial romp. But do Michael Bay’s “Bayisms” overshadow the subject material of a film based on true events?

Michael Bay is pretty much the quintessential director when it comes to action films. His name and his films are synonymous with fast cars, scantily clad exotic women, raunchy humor, slow motion shots and explosions. Lots and lots of explosions. So it was to my surprise when I heard Bay was tapped to helm and direct Pain & Gain, a movie based on the Sun Gym Gang’s kidnapping, extortion and murder spree that took place in Miami during the mid-nineties – a far cry from the Transformers film trilogy he just completed.

Thinking that Bay’s movie-making values and philosophy had reached a level of maturity after learning about the subject matter of his post-Transformers film I went into Pain & Gain expecting Bay to show me something new. Something fresh. Something I hadn’t seen from him before.

Well … let’s just say some things change and some things stay the same. Here’s the breakdown.

Without spoiling too much of the plot Pain & Gain stars Mark Wahlberg and Anthony Mackie as Daniel Lugo and Adrian Doorbal respectively, two body builders who work at Sun Gym in Miami. Lugo helps turn things around at the gym to compete against the rival Gold’s Gym but still finds himself stuck and in a rut and wanting more out of life. After crossing paths with very wealthy and belittling client Victor Kershaw (brilliantly played by Tony Shalhoub), Lugo hatches a scheme to kidnap, torture and extort him for his fortune. New Sun Gym recruit Paul Doyle (Dwayne “The Rock” Johnson) is brought into the fold to round out the scheme and the rest is history and for you to find out.

Pain & Gain sports a well-balanced cast that actually worked surprisingly well together on screen. I’m usually apprehensive about Mark Wahlberg who usually acts in one of two modes, either overly over-the-top and dramatic or overly over-the-top moronic, with little wiggle room for go-between. In this film however he was able to play a pumped up meat-head without a problem.

I will have to say however that The Rock’s performance in this film is probably what saved it for me. It was so different to see Johnson take on a role where he was a softy ex-con with a heart of gold. His comedic timing was great and he was ultimately the glue that held the film together in my opinion – which is probably why they marketed it so heavily with Johnson all over the posters even though his character doesn’t even show up until a third of the way through the film. Ed Harris’ and Rebel Wilson’s characters also stand out among the film’s cast and round out the rest of the key players in the film’s story.

Now I liked quite a bit about this film. But liking Pain & Gain for some of the reasons that you may find yourself liking it for is a double-edged sword – and therein lies where the moral dilemma comes in. But first I’ll start by mentioning what I liked about the movie.

One of the aspects of Pain & Gain that I found very satisfying was the point-of-view changes that were thrown into the film to tell a character’s side of the story and give the audience a look inside their world from their perspective. Side-stepping from the story briefly to look into the minds of the characters was jarring at first but you got used to it rather quickly and the clever usage of voice over, the believable acting and text layover effects really sold it.

Bay was surprisingly able to deliver a crime-thrilling action-comedy that really brings it home.

Michael Bay also did a sly job of still making this film a typical Michael Bay movie which I found to be quite surprising given the nature of the film’s subject matter. The raunchy humor was still ever present along with the scantily clad exotic women, fast cars, slow motion effects and of course … an explosion. Coupled with the cast’s superb acting chemistry and The Rock’s stand-out performance, Bay was surprisingly able to deliver a crime-thrilling action-comedy that really brings it home. Yes, I said comedy.

Now here’s that moral question I kept referring to and what I didn’t like about the film. I went into this movie knowing it was based on true events involving kidnapping, torture and even a murder or two thrown in for good measure. I wasn’t sure that the tone Bay took with this film was the right one. Because Pain & Gain basically made out the Sun Gym Gang’s exploits out to be a joke. I was entertained and I laughed at things that I probably shouldn’t have been laughing about. Should I have enjoyed the hilarity and antics Bay portrayed onscreen? Even though people’s lives were affected by the actual events? Had this movie been purely fiction I wouldn’t have had this moral question looming over my head after seeing the film.

Pain & Gain was funny. But in actuality it probably was handled insensitively.

I recall probably the most signature moment in the film where the movie reached a point where the insanity of Pain & Gain actually had to be summed up with a subtitle that flashed onto the screen that read “This is still based on a true story.” And me along with the rest of the audience laughed. Pain & Gain was funny. But in actuality it probably was handled insensitively.

If you can look beyond the fact of the rather insensitive and tactless approach to portraying the subject matter, Pain & Gain can actually be an entertaining film. If you’re a fan of Michael Bay this film won’t disappoint, nor will it let you down if you’re a fan of Mark Wahlberg and especially The Rock. My only request is that you at least be mindful of the serious nature of this movie’s truthful origins. 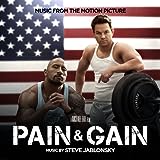