She & Him’s Volume 3 has lots to love, but nothing new

Clacked by Julia Hass on Wednesday, April 3, 2013 · Leave a Comment She & Him’s new release offers lots of summery tracks worthy of a listen, but not a lot that hasn’t been heard before.

She & Him, the joint music project of Zooey Deschanel and M. Ward, is set to release their third studio album, Volume 3. If you’ve heard the single “Never Wanted Your Love,” you’ve heard the album, and that’s a good and a bad thing. If you like She & Him’s brand of adorable, vintage-inspired songs that sound like bottled sunshine, the good news is that Volume 3 is more of the same. But if you’re looking for variety or mold-breaking, Volume 3 is not the album you’d go to to find it.

Volume 3 is an album of highs and low, which, much like Deschanel’s voice, switches between strong on some tracks and blaring and cutesy on others. At its best, Volume 3 is a sweet summer album, a palate-cleansing respite from the usual bass-heavy party anthems that dominate the summer pop charts. The three cover tracks (Blondie’s “Sunday Girl,” “Baby” by Jeff Barry, and “Hold Me, Thrill Me, Kiss Me” by Ray Noble) are all stand-out successes, as is M. Ward any time he and Deschanel blend their vocals — they bring out the best in each other. The theme of Volume 3 seems to be that of lost love, but it’s a sentimental, sepia-toned lost love that ranges from empowered (“Never Wanted your Love”) to thoughtful (“Turn to White”), to the love of a lost place (“London”). At its worst, Volume 3 is an overly-sweet grab-bag of been there, done that influences (Buddy Holly, Dusty Springfield, and The Beach Boys were just a few that sprang to mind), and a few real clunkers (“Somebody Sweet to Talk To” and “Something’s Haunting You”) can feel like too much of a good thing, or just trying too hard.

Those who have never enjoyed She & Him’s twee, strummy sound won’t find much new on Volume 3, but fans of She & Him’s other albums or those looking for lighter warm-weather listening will find a lot to love. 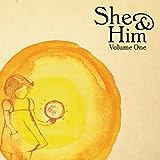 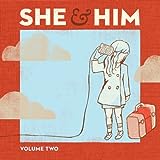 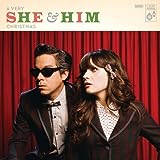