Clacked by Kim Tibbs on Thursday, September 18, 2014 · Leave a Comment This week’s Throwback Thursday installment takes us all the way back to the good ol’ days of 1910, as we ‘Turn Back the Clock’ with Lee Tracy, Mae Clarke, Otto Kruger and Peggy Shannon.

Time travel, particularly when the main character uses it to correct past mistakes, is certainly a popular subject in literature and film. Whether part of the sci-fi, romance, action/thriller or comedy genre, it’s a subject that fascinates everyone from the very young to the very old and all those who remain young-at-heart. Thanks to the continuing efforts of the Warner Archive Collection, I recently watched Turn Back the Clock, one of the earlier films dedicated to the subject.

Released in 1933 by Metro-Goldwyn-Mayer Studios, Turn Back the Clock stars Lee Tracy and Mae Clarke as Joe and Mary Gimlet, a husband and wife who own a small cigar store in New York. The couple makes just enough money to take care of their basic needs – they have a meager, but cozy apartment above the store, and there’s always food on their table, even if it is just beef and cabbage. They’ve managed to save up $4,000 in 15 years, which in 1933 that was a great deal more than it is now. That’s not exactly enough to retire in style, but it’s a pretty decent nest egg for a hardworking couple in their early 40s. Not to mention this was in the midst of the Great Depression, a time in which many were far less fortunate than that.

Joe tells Mary that he wishes he could do his life over again and marry Elvina because he thinks he would be a happier man if he were rich.

One day an old childhood friend named Ted Wright (Otto Kruger) comes into the shop, flaunting his wealth and presenting an opportunity for the couple to get dressed up and attend a fancy party to see how the other half lives while under the pretenses of a happy childhood reunion. Joe learns that Ted married Elvina (Peggy Shannon), who was the daughter of the richest man in their hometown, and has done alright for himself over the past 20-odd years since they last saw him. It seems Ted now wants to “share” some of that wealth with the Gimlets in the form of a financial investment he has recommended. Partially because of the large quantities of booze he has consumed, Joe is eager to gamble all of their savings away because he desperately wants a piece of what Ted has acquired. However, Mary cannot be persuaded that it is a sound investment. The couple has an argument over the money, during which Joe tells Mary that he wishes he could do his life over again and marry Elvina because he thinks he would be a happier man if he were rich. Joe then runs out of their apartment and is struck by a car.

When he wakes up, Joe finds himself 20 years younger but with the memories of his other life still intact. He has been transported back in time to the day when Elvina and her father came into the drugstore where he was working and her father offered him a once-in-a-lifetime opportunity to become a business partner since he knew he was interested in his daughter. This time around, Joe takes the opportunity, blows off the sweet, young, beautiful Mary and marries the rather stupid, spoiled-rotten Elvina instead. Not so surprisingly, Ted pursues and marries Mary in Joe’s absence. The two are seen courting during Joe and Elvina’s wedding party, much to Joe’s dismay.

The rest of the film offers a unique glimpse in history, as Joe is seen making business deals with a then-unknown Henry Ford, busily working for President Wilson during World War I (because when President Wilson comes a’hollerin, you don’t say no apparently), living it up during the Roaring ‘20s with multiple homes, servants, fancy clothes and cars and ultimately trying to avoid the financial ruin of the Stock Market Crash of 1929. No matter how much wealth, respect and fame Joe acquires, he begins to realize that money can’t buy everything. He yearns for his old life with Mary back, as he realizes Elvina is not only spoiled and annoying, but is also an unfaithful liar and terrible at managing money.

Turn Back the Clock is a refreshing film with a talented cast that had an It’s a Wonderful Life meets Peggy Sue Got Married tone to it.

While it may be a sleeper that hardly anyone has ever heard of, Turn Back the Clock is a refreshing film with a talented cast that had an It’s a Wonderful Life meets Peggy Sue Got Married tone to it. Just about everyone has had a point in his or her life in which they’ve fantasized about going back and doing something over again. It left me with a lot of burning questions. If you had the opportunity to go back in time and change a pivotal decision, would you take it? Do you really think your life would be changed for the better, or do you think there would be unforeseen negative consequences of your actions? If you’re a fan of time travel movies, you’ll remember what happened when Marty McFly tampered with time or what Peggy Sue learned when she went back and relived her youth. Maybe we’re better off where we are. Maybe there is no free will, only fate that leads each of us exactly where we’re supposed to be. The jury is still out on that one, but one thing I know for certain is that I enjoyed Lee Tracy’s performance in Turn Back the Clock, and I think you will too (especially if you’re a history buff) if you just give it a chance. 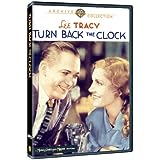