Predictions for the Game of Thrones finale Each week, readers Bob and Ivey discuss ‘Game of Thrones’ from the perspective of those who have read the books. This week we discuss the upcoming season finale (and the Red Wedding, because we can’t help ourselves). Spoilerphobes beware!

The moment we have all been waiting for has finally come to pass. After years of waiting, wondering how it would look on the screen, book-readers and TV-watchers alike are now on the same, incredibly important page: Grey Worm is a badass fighter. Oh, plus the Twins played host to a couple throw-away scenes.

Unless you were wondering why the Blackfish traveled to the Twins in the first place, this column is probably not for you.

But seriously folks, the Red Wedding is obviously one of the most iconic moments in the whole of George R. R. Martin’s A Song of Ice and Fire series. Walder Frey’s ultimate betrayal to Houses Stark and Tully has been known to cause books to be thrown across the room at high volume and now that we’ve got a television equivalent, the internets have provided us with some truly funny reaction videos.

But as truly epic as the Red Wedding is as a singular moment in the series, the fallout that rains (get it?) down all across Westeros is equally important. As we now only have one episode left in Game of Throne’s third season, this week’s Beyond the Wall will look at how the finale will handle the aftermath of Edmure and Rosalyn’s wedding, the sack of Yunkai, Sam the Slayer Wizard and all of the other plots that need to be attended to.

But before we get to the fun, our weekly reminder. Beyond the Wall is a column for those that have already read the books that Game of Thrones is based on. So unless you were wondering why the Blackfish traveled to the Twins in the first place (and were appreciative of his very opportune need to relieve himself), then this column is probably not for you.

Ivey: I thought starting things off with Talisa’s very brutal murder was a good way to shock those who knew what was coming.

Ivey: So that happened. I mean, we knew it was going to happen. In some ways we were dreading it — for our own sake’s — and others eagerly awaiting it — so all those newbies can finally know the feeling we’ve all shared. And other than a couple minor things (Like Roose running out like a little Frey when Cat slapped him), I thought the show handled it very well. I thought starting things off with Talisa’s very brutal murder was a good way to shock those who knew what was coming.

Bob: Yeah, I really don’t have any complaints about the Red Wedding. The whole creative team did a great job. The whole thing played out fantastically on screen. It was drawn out nicely and certainly wasn’t rushed. The actors were spot on; I mean, come on, how great was David Bradley through the entire episode? Fairley got some great tape for her Emmy reel, too. It’s obvious that the writers and producers really held this event in as much esteem as the fans.

Bob: I can’t imagine that writers will leave Cat’s resurrection to season four.

With that out of the way, though, I can’t help but look ahead to the finale. It’s going to feel odd going back to that world and seeing all the aftermath of the events, but it should be interesting too. I imagine that we are going to see a lot of reaction from the Lannisters. There are a few other things I’m expecting to see, though. I can’t imagine that writers will leave Cat’s resurrection to season four. With all the time spent with Berric earlier in the season and not much opportunity to get back to him next, it would seem natural to have that happen in the finale.

Ivey: The first thing I’m looking to is the direct aftermath at the Twins. Will we see the desecration of Robb and Grey Wind’s bodies? I think at the least we’ll see Cat’s body tossed into the river. I’m torn on whether or not we’ll see what happens next. On some level, the logistics make too much sense not to — keeping the fact that Fairley is still attached to the show is going to be extremely difficult — but I think giving the audience a hint of unCat so immediately following the wedding will rob some of the emotional impact “Rains of Castamere” pulled off.

I’m also very interested to see exactly how Jaime Lannister reacts to the news — assuming he makes it back to King’s Landing as I suspect he might. The writers were very careful to protect his redemptive arc by changing one of my favorite lines in the novel — Roose’s “Jaime Lannister sends his regards” to refer to the Lannisters in general. In the books, GRRM could afford to be much more subtle with Jaime’s arc; I suspect it will be less so on the screen.

Bob: I don’t really see [Jaime’s] arc as a redemptive one, but I think his experiences have certainly changed the way he’s looking at things.

Bob: It’s interesting. I would never use the word “redemption” when it comes to Jaime. It’s not a stretch, but I think part of the beauty of Martin’s world is that people are people. They grow and change and, for the most part, act like people, not like stereotypical fantasy archetypes. I don’t really see his arc as a redemptive one, but I think his experiences have certainly changed the way he’s looking at things. The characters are multidimensional and I think it’s a big part of why so many people (and so many non-genre fans) connect with the show. Even Cat hated Jon Snow — and it’s easy to understand why.

There are several other things I’m looking forward to seeing this week. I’m curious to see if anything is going to happen with Jorah’s spying early in the show. We were teased with it in a “previously on” segment, but nothing really came of it other than some glares from Selmy. It seems like it’s way too early to bring that plot turn to light, though.

Ivey: I’m not sure I have ever seen a man’s heart break in real-time, but that’s what it felt like. Jorah Mormont, welcome to the Friend Zone.

Ivey: Yeah, I think the focus of anything Jorah-related this season will be related to the growing attraction between Dany and Daario. Did you see the look on his face when she asked after the younger, fairer warrior? I’m not sure I have ever seen a man’s heart break in real-time, but that’s what it felt like. Jorah Mormont, welcome to the Friend Zone.

I’ve really enjoyed what little we’ve seen of Sam this season. Without Coldhands guiding them to the Nightfort, the Sam/Bran meetup is going to come across considerably more trite than it did on the page. I’m interested to see if they’re able to find a way to avoid it coming across as too convenient.

Bob: I was convinced that Dany’s big ending was going to be the battle of Yunkai, but that snuck its way into “Rains,” so I’m not really sure what we’re going to see in Essos this week. It could be Jorah, it could just be all the slaves of Yunkai joining her ranks.

In any case, I think we’re probably in store for a pretty quiet finale. After saying that, there’s bound to be a surprise or two, but I think it will mostly be reaction to the Red Wedding and maybe putting a few pieces in place for next season. I imagine we’ll probably hear something about the Dornish making a trip to King’s Landing. There was also a quick snippet of Asha/Yara in the previews. It most likely means that we’ll see Balon’s end, giving a little more credibility to Melisandre’s leeches.

Ivey: In two seasons, this show has always finished on an incredibly strong note, but nothing really jumps out to me what that could be … other than unCat. Maybe with Arya experiencing her first wolf-dream as Nymeria pulling her out of the water. It could also be Wildlings marching on the Wall, but it doesn’t look that will play out — with a southern attack first — like it did in the books.

Regardless of what happens, we can be confident that Game of Thrones will deliver a solid finale … it always does. 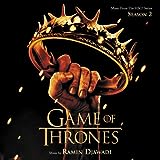 One Comment on “Predictions for the Game of Thrones finale”