Heart of Darkness lacks bonus content on DVD, but still an entertaining film

Clacked by Jaylen Christie on Thursday, February 13, 2014 · Leave a Comment Recently released by the Warner Archive Collection, ‘Heart of Darkness’ is a nice way to while away Throwback Thursday.

While it may be safe to say that movies are indeed a dime a dozen, good films are in fact few and far between. Take it from me, folks. I’ve been watching films since I was a kid. From what I can ascertain, it seems that back in the early days of motion pictures, it was a non-negotiable prerequisite to produce quality films. These days, the bad outweighs the good. This is why it comes as such a welcome relief to see Warner Brothers releasing DVDs from their awesome Archive Collection. Look at it like the Disney vault – but instead of fun animated sing-alongs, it’s live action thrillers.

One of the films that have been recently released from the Warner Archive Collection is Heart of Darkness, the 1993 thriller starring John Malkovich from RED and RED 2 and Tim Roth whom I’d only known from his role in 2008’s The Incredible Hulk.

I’m pretty sure I just dated myself. Don’t judge me.

As someone who appreciates films, I really don’t mind the fact that Heart of Darkness is over 20 years old. In fact, I thought that made it all the more fun. The movie was made for television and was based on the novel by Joseph Conrad. It’s really quite entertaining.

Picture it – steamy Africa, the turn of the century. There is a group of determined colonial traders who are out scouring for treasure. Among the traders is Marlow, played convincingly by Roth despite what others may tell you. Along his expedition through the Congo, Marlow hears tell of the mysterious Mr. Kurtz, a disturbed chief of a remote trading station. This, of course, peaks his interest. As Marlow gets closer to finding Kurtz, he soon learns that Mr. Kurtz isn’t as mysterious as he is bonkers, and is now up to no good. Spooky, eh?

The film isn’t a bad way to kill 100 minutes especially when one has nothing to do. The locations were beautiful and breathtaking. One of the things that I particularly enjoyed, aside from a cameo appearance from supermodel Iman, was the scenery of the jungle and the different shots of Africa in addition to some of the actors and actresses recruited to portray the natives. Being a big Indiana Jones fan, I’m a sucker for things like this. I’m also a sucker for bonus features … which this DVD sorely lacks.

There are no gag reels, no behind-the-scenes interviews, no director commentary or deleted scenes. Instead there is just a bland menu screen with a shot of the famous Warner Brothers tower. I could complain about this but I suppose the film wasn’t released for those wanting more behind-the-scenes information. After all, as stated earlier, this is a made-for-television film. I won’t dock them for that. Besides, it’s probably not geared towards individuals in my age demographic. That’s fine.

Heart of Darkness is approximately 105 minutes and is presented in a full screen ratio of 1.37:1. Additionally, it is also showcased in Dolby Digital. Certainly can’t go wrong there. I enjoyed it for what it was – a fun and mysterious adaptation of a good read. 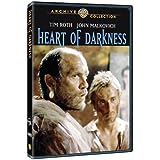