High School – Senior Year. His suicide shattered their world. Their courage drove them to pick up the pieces. With a serious topic like teen suicide, is ‘Permanent Record’ still relevant nearly 30 years later? Find out in today’s Throwback Thursday installment.

“Being a teenager isn’t anything – it’s everything. It isn’t a big deal, it’s a HUGE deal; and while you’re being a teenager, you ought to live it up because this is the one chance, the one time, you’ll be young, and free and careless because you are only young once. So screw it up, because in the end, no one gets out alive anyway.” – Anonymous

Ah, the teen years. Those years of reckless abandonment that can be one of the most thrilling, daunting and awkward times in a person’s lifetime. Perhaps you nostalgically recall your own teen years. For most people, they were either the best of times or the worst of times. There does not seem to be any middle ground. Emotions and hormones both ran high as you tried to find yourself and your purpose in life. These are the moments you’ll never forget and many yearn to recreate. Time was best spent hanging out with friends, ditching school and studying. For many, it was a time to experiment with sex, drugs and rock ‘n’ roll. A time to be free to discover who you were and who you were not before being bogged down by responsibilities and the stresses of daily adult living.

Being a teenager wasn’t all parties and debauchery … remember all those uncertainties about the future?

But put away those rose-colored glasses – being a teenager wasn’t all parties and debauchery. It was also a time when you had a million questions and uncertainties about the future that no one could seem to answer. For many, maybe it felt like nobody really understood you. Certainly not your parents or siblings or your annoying guidance counselor. If you were lucky, perhaps you had that one best friend or significant other who understood you better than most. If you were not fortunate enough to find your soulmate when you were young, maybe it was one of the loneliest and most confusing times of your life. On a scale of 1-10, your pain and anguish could have easily been an 11 on any given day. Is it any wonder that teen suicide is so common? And yet, most people would prefer to turn their backs and ignore the issue rather than open it up for honest discussion.

The Warner Archive Collection recently released Permanent Record on DVD and graciously sent me a copy for review. Released by Paramount Pictures in 1988, Permanent Record stars Keanu Reeves, Pamela Gidley, Alan Boyce, Michael Elgart, Jennifer Rubin, Michelle Meyrink and Richard Bradford. Music aficionados should note the special cameo by Lou Reed in the film and the fact that the majority of the soundtrack was produced by Joe Strummer of The Clash. These were certainly strong selling points that made me volunteer to review the film. I was also curious to see if Keanu Reeves could be a serious actor. I love him, but Bill and Ted’s Excellent Adventure and Speed aren’t exactly Shakespearean plays. And I’ve never seen The Matrix (but that’s another story).

High school senior David Sinclair (Alan Boyce) seems to have it all. He’s an insanely gifted musician who has just been accepted into a prestigious music school – one of 18 out of over 200 applicants. He makes good grades and is popular among his fellow students. David is blessed with good looks, good brains and a good sense of humor. He’s in a band that’s about to record in a studio. He’s working on the music of his high school’s production of HMS Pinafore. He’s got two parents that dote on him and a younger brother who idolizes him. He’s got a girl who he sees on the sly who adores him, and a girl friend who he adores that I think also secretly adores him. However, the insurmountable pressures of being a successful teen finally get to David. David decides to commit suicide by toppling over the edge of a cliff during a party about 30 minutes into the film, leaving behind an entire community and family in shock. The rest of the film is spent working through the emotional aftermath. If the Davids of this world can’t make it, what hope is there for the rest of us?

Keanu Reeves puts in a solid, compelling performance as David’s best friend Chris Townsend. We see Chris go through the five classic stages of grief: Denial and Isolation, Anger, Bargaining (Helplessness/Vulnerability), Depression and ultimately Acceptance, as he comes to terms with David’s suicide and the fact that it wasn’t his fault for not seeing the “tell-tale” teen suicidal symptoms prior to the deed. While the film may begin with Keanu as another typecast teenage surfer/rocker a la Bill & Ted, it’s clear by its end that he’s actually pretty well-rounded and an emotionally versatile actor. The other teens also put in good performances, but the other character I found most intriguing was the school’s principal played by Richard Bradford. I’ve never seen an administrator more dedicated to ensuring his students’ success and overall well-being. If our schools were full of more caring individuals such as him, I think maybe the teen suicide rates would be lower.

The other thing about this film I wish to highlight is the song “Wishing on Another Lucky Star.” This is the song supposedly written musically by David before his death and finished lyrically by Chris after. It is sung acapella in a moving, memorable performance by Lauren (Jennifer Rubin) in the film. After being denied the chance to honor David in a memorial service at the high school, Lauren does so by singing his song while on stage for a solo in HMS Pinafore . That scene gave me goosebumps the first time I watched it. On the soundtrack it is sung by J.D. Souther. It has some beautiful lyrics, and even if you don’t check out the film, I highly recommend checking out its soundtrack.

All in all, I think Permanent Record is well done in its genre, and I think it is still relevant nearly 30 years later. It’s a shame we weren’t shown this film when I was in high school. I sat through countless films about self-esteem, teen pregnancies and spousal abuse. I could’ve used an honest look at teen suicide and its aftermath. If you can get past some of the hokiness of the ’80s (there seems to be a lot of soul-searching while gazing out wistfully at the water), I think this is a powerful film with an important message. Perhaps it could sway some impressionable minds into not going through with suicide. The DVD doesn’t have any bonus features, but is still worth checking out. Keanu Reeves actually can act, and act well. 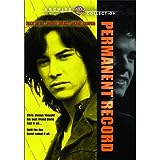 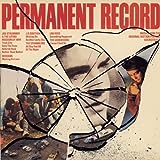